A Dive Into Heraldry

Looking over the pictures at St Leonard’s that I took in January, I became interested in the heraldic family crest that sits atop the memorial to Sir John Reresby (1634 – 1689). Crests and coat of arms like this were quite common on memorials to individuals with some rank or title. Sir John, as I explain here, was a member of the Baronetcy, the only British hereditary honour that is not a peerage.

A baronet is addressed as “Sir” (just as is a knight) or “Dame” in the case of a baronetess, but ranks above all knighthoods and damehoods in the order of precedence, except for the Order of the Garter, the Order of the Thistle, and the dormant Order of St Patrick. Baronets are conventionally seen to belong to the lesser nobility, even though William Thoms claims that “The precise quality of this dignity is not yet fully determined, some holding it to be the head of the nobiles minores (a minor honor carrying with it no knighthood), while others, again, rank Baronets as the lowest of the nobiles majores, because their honour, like that of the higher nobility, is both hereditary and created by patent.” – Wikipedia (link) 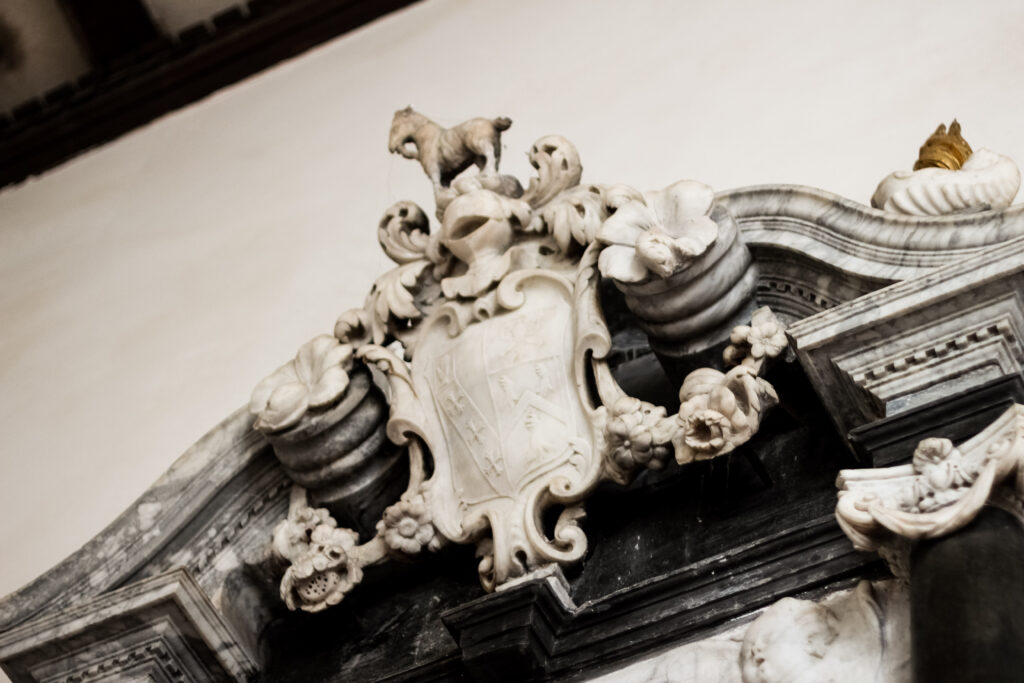 The basic design of the crest is quite easy to determine and there are plenty of resources on-line for anyone wanting to research the different facets of it. At the top is a knight’s helmet – forward facing rather than right facing to denote the Reresby Baronetcy – surrounded by a mantel of leaves and flowers. The helmet is mounted with a torse, or wreath, of ermine and crested by a goat.

The shield itself I find a bit unusual as it is split into three. A three way division in heraldry is known as tierced but this shield is not tierced because the divisions are not of equal measure. From what I can gather this division would be known as party per pale, second part per fess – where per pale means a vertical division and per fess means a horizontal division.1

The left hand side of this division is quite clearly the Reresby crest. Burke’s Encyclopedia Of Heraldry describes it using wonderfully florid language thus “gules, on a bend argent three crosses patonce sable“2.

“Gules” refers to the red background colour of the crest, the background always being the thing first described. The “bend” is the top left to bottom right stripe across the middle, “argent” being the colour white. “Three crosses” are obvious even for the layman – “patonce” is a reference to the style of cross (although these look more akin to “fleury” to my untrained eye). “Sable” is the colour black. One supposes a modern English version would read “red background, a white diagonal stripe from the top left to bottom right, with three black patonce crosses.”

The bottom right of the crest is the Yarburgh family crest and must have been added by this or the previous generation. Sir John’s mother was  Frances Yarburgh (sometimes spelt “Yarbrough” or “Yarborough”), the daughter of Edmund Yarburgh of Balne Hall, just north of Doncaster. She later married Thomas Moysey after the death of her husband, Sir John’s father (also, confusingly, called Sir John!)

The Yarbugh crest below is described in Burke as “party per pale argent and azure, a chevron, between three chaplets all counterchanged.“3

“Party per pale” is a vertical division in  two, “argent” and “azure” the colours white and blue respectively; “chevron” means pretty much the same as modern parlance; while the “chaplets” refer to a wreath, usually incorporating floral elements (though not always) and in this case being full circle. I like the “counterchanged” element, where the colours of the individual elements are the inverse of the background in each half. A modern English rendering might read “two halves, one white, one blue; with a chevron and three full circle wreaths, the colours inverted with their respective backgrounds.”

In trying to “decode” the crest on the Reresby memorial I was left with two puzzle points.

One – a left hand, palm facing outwards, on the Reresby side of the crest – is more commonly seen as a red, right hand on coats of arms associated with Ulster in Northern Ireland and I have seen it drawn red on variants of the Reresby coat of arms. A left hand is commonly used to denote the baronetcy occupied by the family though and that is the case here.

The final piece of the puzzle was the top left of the shield. It’s difficult to make out from the photographs I have and I had planned to go back to St. Leonard’s to get a better, more contrasted image. But lock down since March has closed the church and so it’s been a case of deduction from what history I know and from what ever else I can research.

Given that the previous generation had combined the coat of arms of husband and wife, I began with the assumption that Sir John’s generation had done the same and that the top right of the coat of arms is most likely to be that of his wife,  Frances. Sir John the younger married a Frances, just as his father did and it does get very confusing when researching these respective families together. She was the daughter of a William Browne, a lawyer in York, but I can’t find any reference to them in Burke’s separate genealogy. 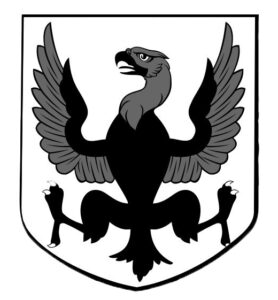 In his encyclopedia though, there are multitude references to heraldry for the Browne family name. One of them, from Uxbridge, has a coat of arms “argent, an eagle displayed, sable. Charged on the breast with a bezant“4 – essentially a white shield on which is displayed a black eagle with a bezant (a coin from the Byzantine era) on it’s breast. This is unusual for the family name as most of the heraldry for Browne includes lions. There are also a few on-line heraldry sites linking to double headed eagles but I can’t find anything matching this in Burke and I’m skeptical about the sources in some of these sites.

Perhaps Frances’ eagle can be explained by her family having ancestors with links to Uxbridge and that is where this particular coat of arms comes from. Either way, it is the only one I can find that in any way resembles the Reresby coat of arms on the memorial, which I’ve recreated below.

The coat of arms from the memorial to Sir John Reresby (1634-1689) in St Leonard’s Church, Thrybergh. This recreation and image (C)2020 Jon Rosling

3 – ibid. Link to the Yarborough entry in Google’s digitised version can be found here.

4 – ibid. Link to this particular Browne [Uxbridge] entry in Google’s digitised version can be found here.